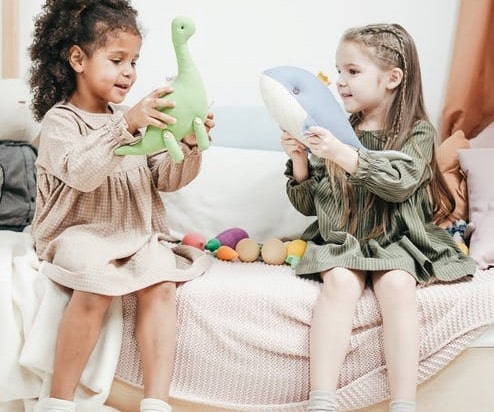 Kids enjoy playing, and while it might seem that they are merely having a good time, this is not the reality. Play is essential for kids’ growth and development.

Kids learn to establish a sense of self through playtime, as well as to socialize and interact with others, cooperate, take turns, work as part of a team, and withhold or reveal important information.

Like everything else involved with human evolution, playtime can entail numerous phases, is complicated, and can be classified into several categories. In this post, we’ll look at different types of play that are important for early childhood development.

In simple terms, it is a voluntary activity that is energetically sought to obtain pleasure. Playtime is essential for kids’ development. This is because it teaches them social skills, self-awareness, and problem-solving abilities. It allows them to unwind and socialize with other children their age.

Additionally, it aids in the development of important motor skills such as concentration and balance. This facilitates learning and school activities even more.

Play actively involves a child’s intellect and fosters imagination and creativity, whether it’s a simple act like role-playing by donning a costume or rolling a ball aimlessly.

Constructive play refers to any play that entails building or assembling something.

This is when kids play side by side but have limited interaction and appear to be doing their own thing without including others. It is most common in kids aged 1 to 2 years.

Kids might sometimes observe one another during parallel play and make alterations to their own play as a result. However, they won’t try to influence their playmates.

Kids as young as 2 or 3 years old are likely to engage in this type of play. Kids engage in solo play by inspecting objects, lifting, and holding toys. They don’t show any interest in the other kids in the vicinity.

This type of play is beneficial for youngsters who are shy about interacting with their peers or haven’t yet developed social or physical abilities.

When kids learn to play organized games with defined rules and criteria for winning and losing, they are engaging in competitive play. Competitive games include football, snake and ladders, and Ludo.

Kids frequently create individuals and circumstances or picture themselves in a specific role during dramatic play and then dramatize those make-believe scenarios. This form of play encourages kids to act out their feelings and try out new words.

Kids’ social skills improve as they grow, and they ultimately learn to interact, work together, and play with others. When kids play cooperatively, they work together to achieve a common goal.

When kids become more interested in other kids and less interested in toys, they are engaging in associative play. While the kids appear to be interacting with their peers, there are no shared objectives, no structure, no clear norms of play, and no organization. Kids as young as 3 or 4 years old are likely to engage in this type of play.

Kids engage in this type of play when they utilize items to enact activities. Symbolic play includes singing, painting, playing music, and coloring.

When kids aren’t actively participating but are eagerly observing other kids’ play, they are considered to be engaging in onlooker play. Kids that engage in this type of play, which is most common in toddlers, learn through observing.

A child performing random gestures such as kicking legs in the air and waving hands is best defined as unoccupied play. These might appear to be random movements, but they are, in fact, a type of play. Infants and newborn babies are the most likely to engage in this form of play.

Play is important for children’s growth and development; hence, parents should not prevent their kids from playing. Actually, parents should aim to play with their children as much as possible because it facilitates bonding. To prevent any mishaps, make sure that you supervise small kids as they play with toys.

What every parent should know about play

Playtime is an important part of a child’s development. It also combats the obesity epidemic that is afflicting a lot of kids today.

You, as parents, are the most ardent advocates of your kid’s education. To encourage emotional, physical, cognitive, social, and verbal development, ensure that kids get as much time to play as possible during the day.

During playtime, kids practice and reinforce their learning in a variety of ways. It provides them with a location and time to learn. Kids, for example, draw and write menus, write checks, take orders, and determine the price while playing restaurant.

Playtime can be both simple and sophisticated. There are lots of different styles of play, including rule-based, sociodramatic, symbolic, and functional games, to mention a few.

Researchers look into a variety of aspects related to play, including the need for recess during the school day, how outdoor play affects kids’ play, how kids learn via play, and the effects of screen time on play.

Go skateboarding, go to the beach, build forts, or play with other kids in the neighborhood to recall your own outdoor experiences. Ensure that your kids have fun outside as well.

Your kid’s emotional development is aided by play. It’s upbeat and relaxing, and it relieves stress and tension.

Playtime is an essential element of a child’s development that needs support and encouragement. However, keep in mind that kids require their own space and time. This will allow them to master these skills, which will emerge on their own.

Parents shouldn’t intentionally teach their children the lessons they learn from play. Rather, the beauty is that kids discover these treasures while playing their games, all while having a good time.