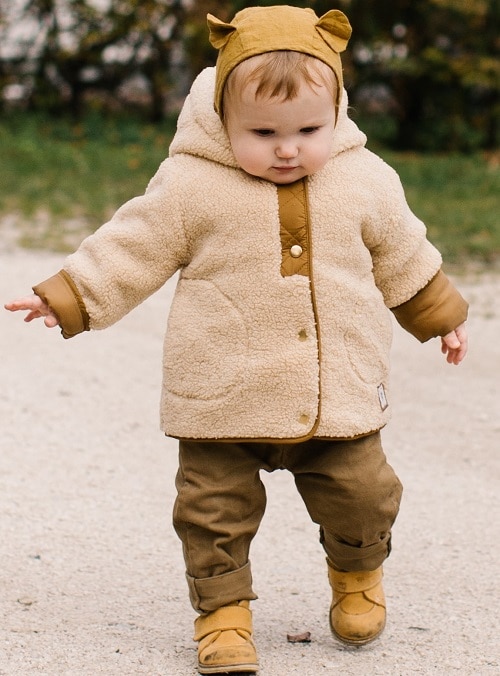 The first steps of your baby are a significant milestone for both him and you. The baby is growing into a toddler, and you should be proud of yourself if they meet their milestones earlier than other newborns.

Studies show that if a newborn shows symptoms of walking quickly or develops other motor abilities like standing and crawling at a young age, they are bound for success in life.

This might not be true for all children, and you shouldn’t compare one baby to another, particularly in terms of development and growth. According to the same study, babies who start to walk later grow normally and have no problems with their motor or cognitive skills.

The truth is that there is no such thing as a baby that walks too soon. When it comes to your baby taking his first steps, though, there are a few things to keep in mind.

Few things to consider when your baby starts walking

It’s difficult to stop and sit

Your early walker will need to learn how to stop and sit once she has gotten used to standing up straight and enjoying being on the go.

Stopping is also far more difficult to master than walking. When babies try to sit, they frequently fall over instead of toppling or stopping!

The ideal method to come to a halt is to fall flat on their padded rear, which is cute and safe. A terrifying thing for a parent of an early walker is witnessing their baby walking, wobbling, or trying to run and knowing that the baby is running out of room and will collide.

It is important to practice. Little ones quickly learn to lower themselves to a sitting position by properly bending their knees.

It may take some time, and they may develop their distinctive sitting style, but they will figure it out after ten or twenty knocks or falls.

You’ll be worn out

Get ready for a whole new level of exhaustion if you thought you were exhausted before your little one began walking. You’ll notice that exhaustion hits you harder after jogging around behind your adventurous little one the entire day.

It becomes more difficult for you as the baby gets more stable on their feet. You never know what these small angels will do, and once they start walking, it isn’t easy to keep them quiet for more than 5 minutes.

You might discover that you now spend your days chasing after them, throwing every risky material out of their path.

It Could Indicate That the Child Is Impulsive

Early walking is frequently a sign of a developing personality in your child. It could indicate that your baby is overly enthusiastic and unwary as they rush or skip past stages.

An enthusiasm to move on and explore is not a terrible thing, but it is a trait that you should avoid. Early walkers frequently wiggle out of your arms and refuse to remain quietly in their pram or high chair for long periods.

Their excitement about being on the go is contagious, and they see adventure around each corner of your house.

Being enthusiastic and unwary at such a young age can add spice to your life as your baby explores every area of your home and declines to sit still. There’s no stopping the baby once they are on the move, so buckle up and enjoy the trip.

Stairs are going to be a nightmare

Stairs certainly give every parent the creeps, and I’m sure we have all been there, owly-eyed, as we watch our little ones try to slap an unsteady foot onto the lowest step and climb.

It is important to have a stair gate in every home. But you better hope you do not have an overly enthusiastic and active climber around who manages to ascend the gate and escape.

It would be no surprise if you had a climber on your hands, given that your early walker has already shown signs of being impetuous.

Everything starts to become unsafe

It’s a death trap in your house. The supermarket is a life-or-death situation. You’re terrified of everything!

It’s possible that having an early walker means you have not finished baby-proofing your home yet. Many people do not anticipate having a child who is constantly on the move and has little regard for limits.

It’s understandable if you leave the drawer locks in the drawer instead of fastening them to it just yet. Unexpectedly, you’re confronted with a walking kid who is enthusiastic about exploring and tearing through your home.

You’ve cleared the lower shelves, and the candles and vases you received for your nuptial are on the top shelf. Cabinets are secured to the wall, and there’s a guard around the television.

Stair gates are correctly positioned, and presses and drawers are baby-proofed.

However, you still aren’t feeling secure. Babies have an amazing ability to find their way into just about everything. The greatest thing you can do is keep a close eye on them, which is not easy.

Your lovely little one will certainly have a bruise or two on their arms, legs, and face. There’s a lot to bang against when a little one wobbles, particularly because their balance isn’t ideal.

At the start of this milestone, newborns have little control over their bodies and frequently stumble when they put one foot in front of the other.

Your little one’s view of depth isn’t as developed as an older kid’s during the start of their walking attempts; therefore, barriers aren’t seen as a danger.

When you factor in their lack of stability and coordination, your little one is bound to trip and tumble. If your baby screams, it’s more than likely because they are angry instead of wounded.

No need to worry. There will be fewer bruises and knocks as the baby grows more stable and learns to balance.

Your enemy will be the stroller

A child who walks early is likely to be more adamant about continuing to walk and will go to great lengths to avoid suffocation in a car seat or pram.

Babies have an unrivaled sense of independence, and they will fight any attempt to limit them in any way. You will see their flat, stiff bodies or curved backs as they resolutely refuse to be pushed into their strollers.

Get ready for arguments, tantrums, and cries when your baby completely declines to cooperate, regardless of how hurried or irritated you are. It’s much more enjoyable for them to walk rather than sit idly while you push them around.

Distraction with songs or games and use of the baby’s favorite toy to teach them, are the best ways to deal with your fighting walker.

You’ll have to come up with a solution, particularly when it comes to securing them in their car seat.

When Is It Time to Worry About Your Baby’s Walking?

The usual age for babies to begin walking is between 14-15 months. However, this can be prolonged until they are two years old. But there are a variety of other factors that might cause babies to walk late.

These are some of the factors:

Let your baby develop at their own rate

Your baby doesn’t have to learn and grow with the same motor skills and strength as other babies. Some babies begin to walk a few months later, which is normal.

As a parent, it’s critical not to push your baby to attain these goals before they’re ready to do it independently during this stage. Pushing a baby to undertake something they aren’t ready for will cause a slowing down of the process or lead to injuries.

Walking is the most significant move your little one can make, and it gives them greater confidence. As a parent, you must encourage your baby to practice in a secure atmosphere.

Every baby requires their own pace for growth, walking, and nurturing, and you must provide ample time and attention for them to do it independently.

Keep track of your baby’s physical development with the help of a pediatrician for professional support and advice.