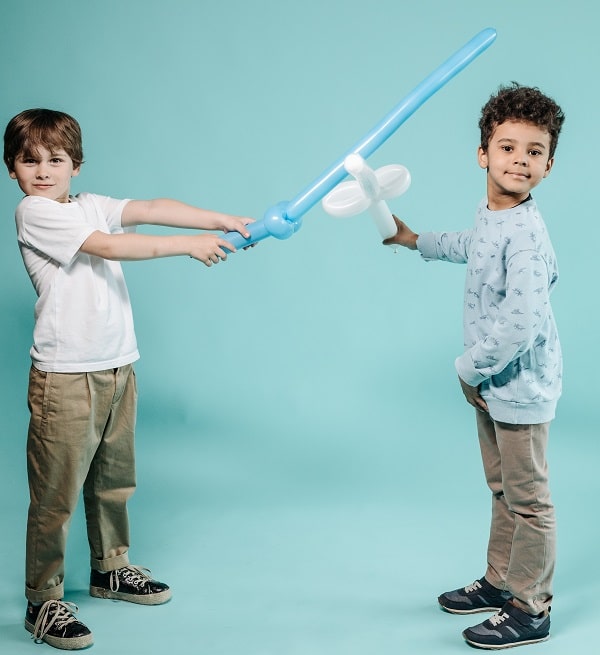 Children, especially those in the preschool years, are full of energy. Their play can get nasty at times. During rough play, boys may act out real or fictitious conflicts, such as fights or wrestling matches.

Play of this nature can give the impression of violence, but in most cases, the players’ true intentions are obvious. During rough play, a child’s expression is frequently one of anger or hostility.

Playing rough is typical for kids their age. They have recently begun to appreciate their own strength and might. Rough play is usually just a fun way to let loose. However, kids will need to learn when to stop playing rough.

You must instruct children about appropriate play boundaries. When physical play escalates to the point where someone could get hurt, it is your responsibility to stop it.

Why is rough play important?

There’s a wealth of research pointing to gender differences in play. The benefits of rough play for boys go far beyond the merely physical.

Boys gain a sense of agency and mastery over their environment when participating in rough play. Some regions of the brain that control social behavior and general cognition feed directly and immediately on the experiences provided by rough play.

So, rough play is a great way for boys to get exercise, make friends, and help their minds grow.

You can’t put a price on a healthy social life or proper emotional development. You also can’t ignore the rough play that will take place in both areas.

Boys can learn to be more attuned to and able to interpret nonverbal signals such as body language, tone of voice, and vocal inflection. They can also understand the need to maintain social hierarchy by engaging in rough play.

Relationship hierarchies are pervasive in many areas of society. They also have a significant impact on the psychological and social growth of boys.

Through rough play, boys learn social skills, the value of rules, and the distinction between harmless pranking and destructive mischief.

If aggression in boys is suppressed, it may eventually surface in unhealthy or destructive ways. This is especially true if you discourage the boys from indulging in rough play.

Some adults may seek to limit, control, or eradicate rough play. This is because they lack a proper grasp of its benefits. They also cannot distinguish between serious and destructive forms of hostility.

Some suggestions on how to deal with boys rough play

Ignore attempts to influence them

You can’t make them any different, so you might as well learn to live with their rough edges. Some boys can’t function unless they have their daily fix of dirt, hard play, and construction. There is no cause for alarm; all you can do is adapt by keeping these suggestions in mind.

Establish a foundation for them to grow on

Even if they play roughly, boys can still benefit from following rules. If you have sons, have a conversation about when it’s a good idea for them to play and when they should focus on other tasks. They’ll be grateful for updates throughout the day.

Guide them toward the correct path

There is a dire need to teach morality to all the rough boys in the world. No matter how much fun they are having, damaging or harming others is never acceptable behavior.

Have a heart for them

Although your boys had a tough start in life, they can still be loved. Strive to fill their voids and demonstrate your concern by making an effort to understand their situation.

Stop talking down to your boys. Always do your best to boost the self-confidence of your boys. Do your best to convey your concerns and their importance in your eyes. Despite their unpredictability, they nonetheless deserve your affection.

Teach them what it means when enough is enough

You can’t always get away with saying your boys are rough. If something has gone on for too long, you may need to stand your ground. They should pay attention to what they want and try to fulfill it. It’s probably not the first time you’ve said something, but you can improve.

Show them ways to calm down

When you’re in this situation, you need to find ways to calm down your rough boys that work. Tell them to take a deep breath and calm down by counting to 100.

In spite of their rough manners, rough boys can nonetheless be polite. Teach them to say “thank you” and “please.” It goes without saying that you should instill in them a healthy regard for others.

Permit them to be rough

Your young boys must learn the appropriate times to display a rough attitude. There’s no point in trying to alter their character when you know you can only offer them positive support and encouragement.

Let them have fun

In order to keep everyone safe, it’s best to let the “rough” boys play. Find them a safe, fun, and quiet spot to play where they won’t disturb anybody else while having plenty of room to go around.

Advice for Parents in Rough Play:

Rough play is welcome, but it needs proper supervision. This will help to prevent any escalation into actual physical conflict. Make it clear to your son what is and is not allowed to happen when playing.

You can provide your youngster with the most valuable education by teaching him yourself. Rough play between parents and their children has several positive effects. This includes teaching kids to respect the rules of the game and providing an opportunity for the two parties to bond.

Once they’ve roughhoused with you for a while, they’ll have a better idea of what constitutes appropriate and inappropriate behavior.

The next time your kid is roughhousing with a friend, they’ll know when to call it quits if things get too physical. They will appreciate their interactions with others more after participating in this.